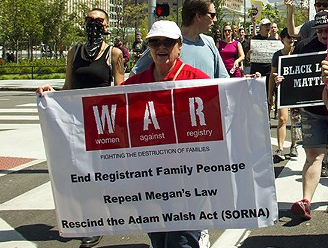 It’s a debate engulfed with concern and emotion in California, as a number of criminal justice leaders and lawmakers – including Los Angeles County District Attorney Jackie Lacey – work to revamp the state’s sex offender registry system.

As it stands, more than 105,000 people are listed as sex offenders in California; however, the state Senate recently approved a proposal that would allow the names of those who had committed non-violent or lower-level sex offenses to be expunged after one or two decades.

California is one of just four states in the country that mandates lifetime enrollment for sex offenders, joining Florida, Alabama and South Carolina. The existing law necessitates that those convicted provide addresses, employee names, fingerprints, license plate numbers and photos to the state Department of Justice after leaving prison, and such information — with the exception of juvenile culprits and those found guilty of incest thus to protect related victims — is available to the public on its website.

Offenders must re-register each year and extensively detail their movements and locations to comply with regulations that prohibit them from being near places such as schools and parks. Proponents of overhauling these laws claim that local authorities then have to spend disproportionate amounts of time processing paperwork on people who have long been free of any offenses or no longer pose a risk.

“The state’s sex offender registry has lost significant value over time because it contains too many low-risk offenders with decades-old offenses,” Lacey told the L.A Times, claiming that their new bill – Senate Bill 421 – would “improve public safety” with a three-tiered system that would provide a greater focus on higher-level offenders.

Sen. Scott Wiener (D-San Francisco), who introduced the new proposal, told the L.A Times that the time spent on paperwork takes away from time that should be devoted to finding potential offenders, and those stuck on the lifetime registry face impediments to everything from employment to housing, which then often leads to mental illness and drug addiction. Moreover, some on the registry say they have been the target of brutal attacks given their information is publicly accessible.

The new “three-tier” proposal would consist of a first tier in which those deemed low-level offenders – convicted of crimes such as felony possession of child pornography with intent to distribute, misdemeanor sexual battery and indecent exposure – could potentially by wiped from the registry all together after ten years.